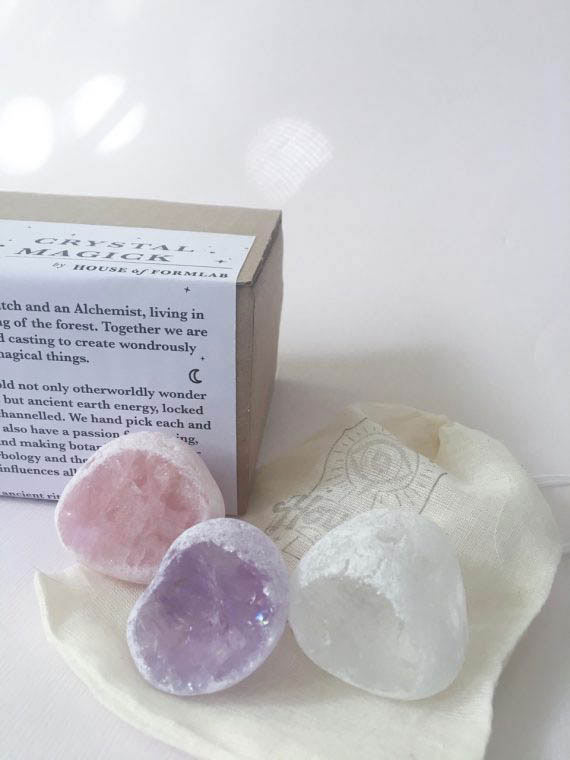 The miracle that is called “the golden triangle”, refers to the combination of three gemstones that generate an optimal energy flow by placing them in your living room. These three stones are amethyst, rock crystal, and rose quartz.

Three stones and a triangle. Both the number ‘three’ and the triangle have always had a special meaning to mankind. For example, in the Christian doctrine of the Trinity; or in Buddhism in the unity of body, speech, and mind. The triangle is a powerful symbol that can be seen in the Pyramids. In the mystical freemasonry, the triangle is the basic principle and the ultimate goal of all that is constructed.

The healing effect of the stones.
Amethyst: Has a positive effect on your autonomic nervous system and thus supports relaxation of both body and mind. It relieves stress-related symptoms like headaches and nervousness. It can even help diminish symptoms of a migraine.

Rock crystal: Cleanses the energy of the room and of your body and mind. Both plants and animals also benefit from the energy of rock crystal. Its energy is likewise both activating and opening.

Rose quartz: Generates gentleness and love and thus supports a more peaceful and cosy atmosphere at home. Brings about a positive emotional exchange between people. With the rose quartz, you (again) learn to love yourself and others.

What about the effect of the three stones combined? The combination of these three stones provides relaxation, purification and the regeneration of energy, of both the living space and its inhabitants.

Using crystals for meditation is a powerful tool to deepen your meditation. Namaste.

Certificates are often hard to come by. There is still no overarching governing body that certifies crystals in the same way as diamonds are now tracked and certified – mainly due to the difference in value. The more outcry there is, the more chance is idea will gain traction. So keep asking and campaigning for ethically sourced crystals and together we can change the crystal universe.

We ship to Netherlands