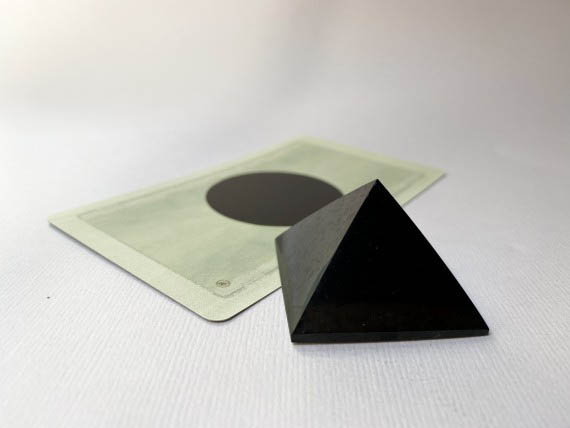 Send your intentions into the universe.

Pyramids are a symbol in Sacred Geometry and are used to focus and amplify energy through their points. They are excellent for manifesting your intentions by transmitting them into the universe, sending questions into the cosmos, and as the centrepiece of power-enhancing crystal grids. These silvery black Shungite pyramids have natural patternation on their surfaces and make an amazing centrepiece for an intention setting ritual.

Ideal for those suffering from fitful, disturbed sleep. As this is a beautifully carved piece of Shungite it should not be used in an Elixer as its perfectly polished surface may get damaged in a container. If you do wish to make an Elixer it is better to use smaller tumbled stones. Shungite is used in the paint pigment “carbon black,” and it can sometimes leave a mark on surfaces when rubbed or scratched (easily washed away).

Only 6 left in stock