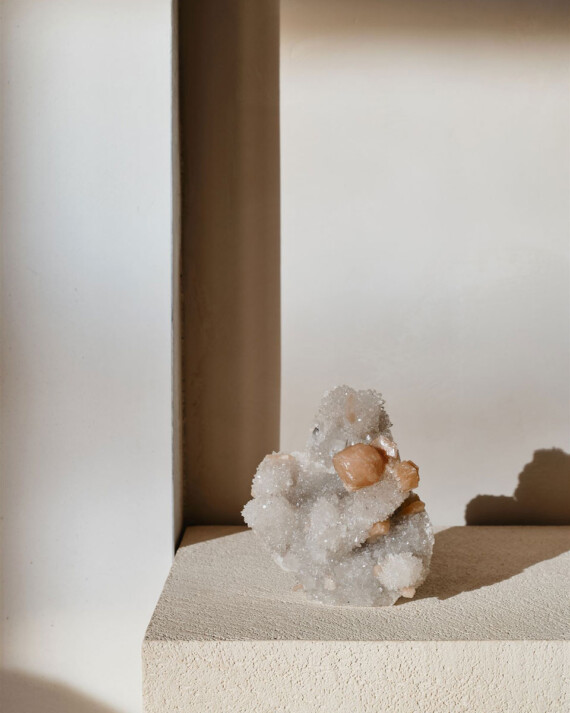 Our divine Apophyllite with Stilbite Natural Cluster was ethically sourced from a small scale family-owned and run mine in Pakistan. They even had us on live video with them while they mined the crystal pocket. It is a mixture of tiny Apophyllite druzy-like crystals and larger more classic Appohyllite crystal structures and there is even one with a double-termination. The blush peach Stilbite is glossy, vibrant in colour – the whole piece just sparkles.

Apophyllite was discovered at the beginning of the 19th Century when the Industrial Revolution was in full swing. According to the Gaia based teachings it was revealed to us by Mother Earth to counter the new materialism and colonisation that was sweeping the world.

A serene and beautiful crystal, it is used by natural healers to ground the spirit to produce calm energy. It cleanses your thoughts and soaks up the negative vibes around you keeping you protected, making it ideally placed in stressful environments.

This Apophyllite with Stilbite Natural Cluster weighs just over 1kg, is 15cm wide and 7cm high at its tallest point.

Only 1 left in stock

Are you looking for a statement or heirloom crystal for your home? A unique or rare crystal specimen? Or wow guests as they enter your office? House of Formlab can find you the perfect crystals with our Crystal Concierge Service.

If you are interested in working with us to find the perfect crystal then you can reach out to us via enter@houseofformlab.com

With love, hugs and crystal blessings,